Week 1 of building a startup 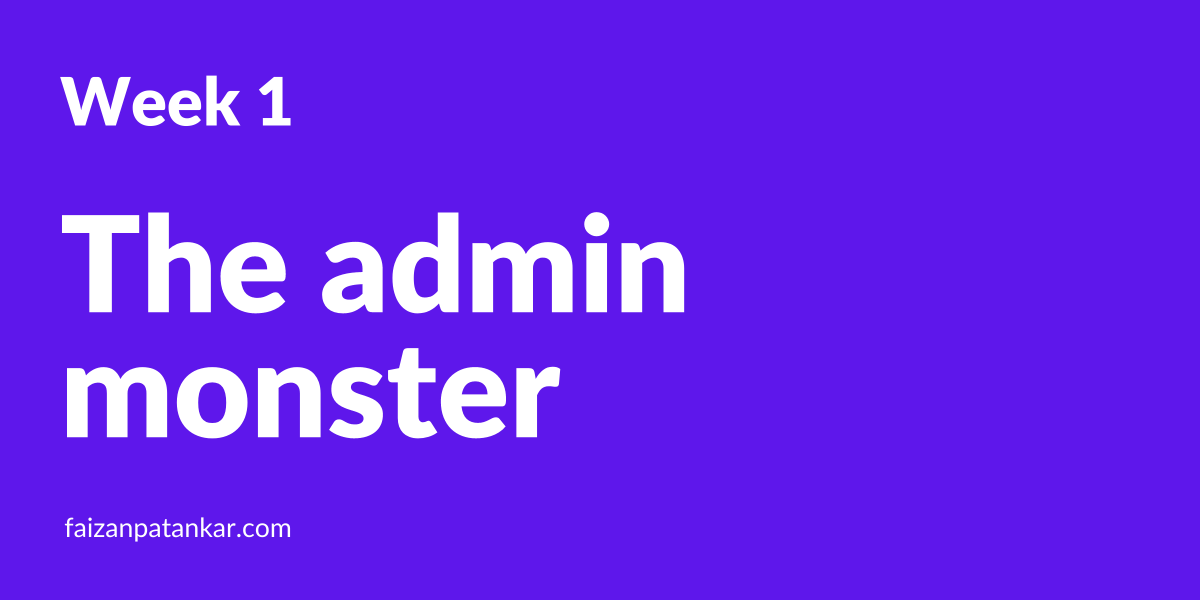 This post is part of the Building It series where I share my journey building a startup, Amygda. Published weekly and as transparent as our customers, investors, and partners would have us be (read: legally allowed).

The past week has been crazy. For the first time in my life, I was working on my own venture, on a Monday, unpaid.

10 years ago that would be unthinkable. I didn't think I would be able to build my own startup.

But it was fun. Lots of admin-related things that needed sorting out. Which I am not a big fan of.

What's the update on prospects?

Anyhow, the better part of my gig in building my startup is engaging with prospects. That's what I love the most. And last week was one where I managed to speak to a large UK airline and a large electro-mechanical manufacturer.

How did I find these prospects?

Finding prospects and potential customers is the hardest part of the gig so far. I don't know what's the best way to do it, so I started looking through my LinkedIn network.

That's where I was able to pick up these two prospects and speak to them further. One was admittedly through an investor who shared something, and through that I got the further connection.

I am sure if you ask a salesperson, she would ridicule my approach. But hey, I know it's not perfect. It's just the way I found these two. Next week might be different, taking the learnings from this week.

To be honest, building a startup is as much about learning and adapting as it is about execution. By the way, the word execution sounds a bit aggressive. What's an alternative to it?

Will the two prospects convert?

Yes, they will. To be honest, I don't know, but when in doubt you just go with the optimistic outcome and drive towards it.

It is other people's job to turn you down. Not yours. So when in doubt, say yes. Within reason.

Amygda is a B2B business and our prospects are large industrial businesses with $500M and upwards in assets + revenue.

So naturally, the sales cycle are long, relative to B2C or B2B2C products.

How is the fundraising coming along?

OK, maybe it's not that bad. But I have a hot/cold relationship with investors. Some investors I speak to baffle me. Like, how did these guys (and they are mostly always guys who are baffling) end up managing other people's money? Within the first 2 mins of a call I know if I am actually ever going to work with a VC or not.

I am sure they make the decision within the first minute.

But then there are other VCs, which are absolute gems. Super-smart and really good people. Those are the kind of partners I would like to build my venture with.

Those are the kind of partners I would suggest you look for.

Had lots of No's this past week from VCs. We are too early for them. And that's ok. I know for some of them we might be early, but it's never been a blocker for me. I do come away speaking to the good VCs with more knowledge than I entered the call with.

Being open to understanding how other people look at your idea or solution is always an opportunity to learn and bring into the venture.

And the journey on fundraising continues.

What else happened whilst building a startup?

Finished reading a couple of books. One of them is hilarious and insightful, it's called 22 Immutable Laws of Marketing.

Overall the book is stuck in 1990s I feel, but there is so much relevant stuff and has given me some food for thought.

Oh, and I did write the launch post on LinkedIn announcing Amygda. And a link with the same content is here on my blog. It's duplicated because, well, Twitter doesn't automatically show up content from LinkedIn posts and between all the social wars, it's better to have things autonomous.

When I read the line above, it doesn't even make sense to me. So don't ponder too much over what I meant.

You can always reach me on LinkedIn or tweet me @faizanpatankar. I am always open to talking and sharing, just mention you read my blog (boost my ego) and I will always reply.